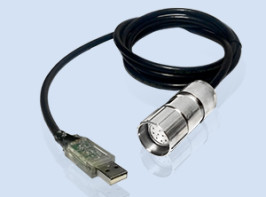 This programming cable is used to power and program programmable incremental encoder TISP58 directly through USB port of a laptop or desktop PC.

The encoder TISP58, from an operational point of view, does not require specific hardware as already equipped with a standard programming port RS232 accessible from the connector of the encoder itself.

To facilitate the end user, it is possible to provide as a programming accessory a soldered at the cable end adapter that operates as an interface between the USB port on the programming PC and RS232 encoder.

Programming cable, code TISP581PRGCBL.20, on the one end has a connector suitable for USB type A, on the other 12-pin female flying connector, directly usable with standard set for the encoder TISP58 .

The total length of cable is 2 mt.

NOTE: for programmable incremental encoders with a cable output we suggest to use the standard programming cable TISP581PRGCBL.20 with an auxiliary connector-to-cable adapter — the new code will be TISP581PRGCBL.20.XC24

The use of the cable allows the direct supply of the encoder via the USB port of the computer avoiding external power supply use.
The cable performs a connection type VCP (Virtual Com Port) by creating a virtual serial connection compatible with standard RS232 even in systems that do not have these ports in native format. The use of the cable, depending on your operating system, may require prior installation of appropriate drivers downloaded from Italsensor website, page programmable encoder TISP58.

Programmable encoder TISP58 can also be configured directly without software TISP58 Manager.
The device configuration can be done via RS232 pure or emulated by sending the appropriate configuration strings in ASCII code after setting serial communication parameters according to the standard 9600, N, 8,1, no handshake.

The communication protocol type command — responce, proprietary type, is solely based on ASCII characters and allows you to set all the functionality of the encoder (resolution, counting direction, synchronous zero, level of the output voltage and reading status internal transducer). This allows the direct configuration of the transducer in the plant without the need of having to configure before its installation.

A typical scenario might be the one that provides downloading of the configuration parameters in the encoder in igniting the plant by a PLC equipped with a serial connection.

This feature allows to avoid possible problems related to the traceability of the configurations for the various nodes of the machine (the configuration is downloaded locally by the PLC of government which maintains the inside memory of the necessary parameters for the transducer) thus allowing a reduction of maintenance time and machine downtime. Even non-specialized personnel can install encoder; as in fact, dedicated equipment to the configuration is no longer necessary, and this operation is performed directly by the control system encoder is connected to.